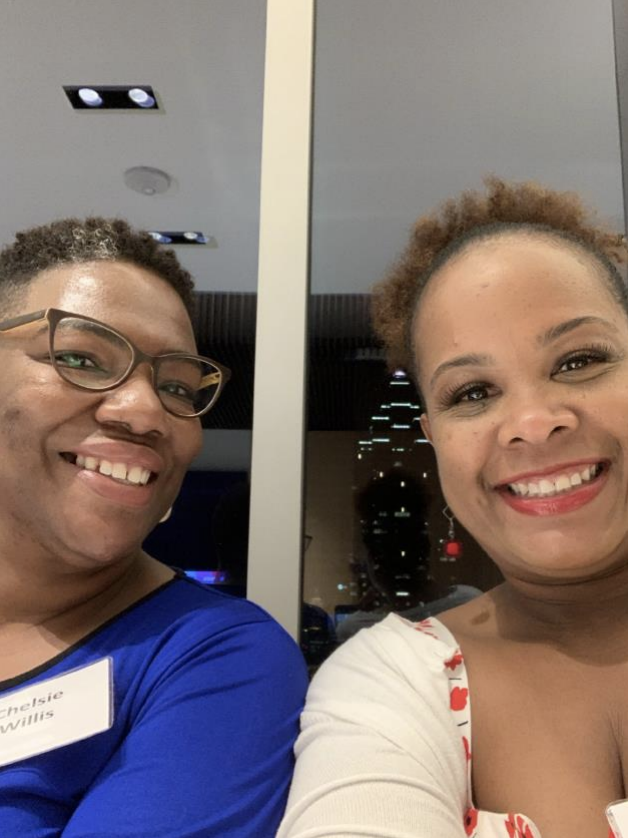 sister, Chelsie, and me at #ClaimingYourSeat

Recently, my sister, Chelsie, told me about an event, Claiming Your Seat, for women in leadership. The event included a panel discussion and book signing by Minda Harts, author of The Memo. The Memo has been described as the Lean In for Women of Color. Luckily, I was able to get a ticket and off the waitlist to attend the event hosted by the Consul General of Canada (Atlanta), Nadia Theodore (@Theodore_Nadia, @CANCGAAtlanta).

As a psychologist, there aren’t many Executive positions given that most of us either serve as clinicians, researchers, or sometimes, both. As fate would have it, two Fortune 500 companies recruited me for Executive positions, freaking AMAZING positions! While I was truly honored to be considered, I was disappointed that I didn’t get either job. After about a week of being in my feelings and arguing with God about getting my hopes up on opportunities I didn’t even know existed, I decided to put energy into what I could control and the greater that was coming…because God definitely has something better in store. This is what sparked my interest to attend the Claiming Your Seat event. I needed to learn more about where God is preparing to take me.

I was not disappointed. The panelists, Minda Harts (@MindaHarts), Nzinga Shaw (@ZingShaw), and Dr. Kamu Bobb (@KamuBobb), were amazing! They
each brought a perspective that resonated with me and the other attendees present. Minda dropped nuggets on the balance of gratitude and owning the space you’re in. Nzinga spoke on being the first person in her position for ANY sports team, and what that meant to be creating a legacy. WOW! “The same water that makes a potato soft is the same water that makes an egg hard…Be patient. Be intentional. Leave the rest up to God…” Nzinga Shaw. She said that! Dr. Bobb spoke on the Imposter Syndrome many struggle with and tied this to our “being groomed to be grateful for things we earned.” Say that again! There were so many nuggets dropped that I was grateful Chelsie had mentioned this on our walk the week before.

The Toll of Success on WOC Mental Health

While the panelists and moderator, Nadia, were amazing, as a psychologist specializing in trauma, what made me sit up in my chair even more were the numerous comments from the audience about corporate trauma. One woman even became emotional asking the panelists about this. Woman after woman spoke about the struggles of being in leadership and the toll on their view of themselves, self-worth, doubt, anxiety, wondering if it was worth it or not, and so on. They were basically talking about the toll on their mental health, though no one used these words specifically. I was amazed and deeply touched. I felt like I was right where I was supposed to be for more than one reason.

I’d experienced my share of hazing during my doctoral program and during my predoctoral internship. There were some politics in the VA that limited advancement for psychologists in general, which in part led to my decision to leave to start my own company. However, the politics definitely caused me to leave prematurely. Minda touched on this and noted that many women leave corporate America after they do not secure a seat at the table. She expressed concern that when we leave these settings, we tend to earn significantly less as entrepreneurs and could benefit from learning how to garner that seat at the table. Again, this event touched me on so many levels.

Author of The Memo, @MindaHarts, Me, and my sister, Chelsie

Afterwards, I spoke to Chelsie about corporate trauma. I was amazed how all this was tying into my life and passion to help people recover from trauma. She has shared some of her experiences of corporate trauma with me over the years and I have provided support to her. That weekend, I connected with my Mamacita, as I lovingly call, Ms. Rosalyn, while visiting DC. We discussed this as well and she endorsed the tremendous toll such positions can have on one’s well-being. She shared that she used her positions in leadership to offer a safe space, by creating an open door policy for young men and women of Color, to process these issues. This is definitely needed.

I have also had patients process their own experiences with corporate trauma and have been flabbergasted by what I’ve heard. The way they are spoken to and treated in the workplace is astounding! Women of Color especially have discussed the struggles of their perceived attitude if they speak up and don’t go along to get along, or receiving the looks of disapproval regarding their attire, or natural hairstyles. Not only this, but the fight to climb the ladder, only to wonder if it was even worth it in the end. And wonder if they had any more fight left in them to continue climbing the ladder to have a seat at the table. Throw in family dynamics, and expectations from them and friends based on this “living my life like it’s golden” perception, and you indeed have a
significant toll on these women’s mental health
from every facet of their lives.

A safe place is needed for Women of Color to share their experiences, receive support, and gain tools to help them claim their seat at the table. It IS worth it when you remember that your worth is not defined by what “they” say about you. Your worth is steeped in who you KNOW you are. Resilient.
Courageous. Persevering. Equipped. Talented. Deserving. Fabulous. Brilliant. Dynamic. Gifted. Amazing. Worthy. Capable. Powerful. More than the eye can see. And so much more! Go claim your seat.

To learn more about the support available for Women of Color with Corporate Trauma, please visit www.propsforptsd.com under Outpatient Therapy —> Groups or at www.drfeliciaberrymitchell.com under Psychologist.

Send Us Your Question